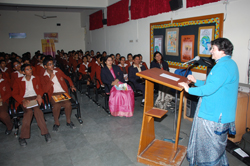 CBSE has restored uniform Examination Pattern for classes VI to X.
The school will be implementing the same Annual Examination pattern in a modified form for Classes I to V as well from the academic session 2017-2018 onwards.
The scheme in new system is as follows:
A. Scholastic
B. Co-Scholastic

The academic session for the students of classes I to V will comprise of two terms, Students will have two assessments in each term to be assessed by the way of one written test to be carried out during the course of the academic year in an extremely stress-free environment focusing on identifying the talents of the learners and empowering them with positive outputs. The Examination Pattern for primary students is as follows:

MIDDLE SECTION
Students of VI to VIII will be evaluated on the basis Periodic Assessment and Term Examination. The Examination Pattern for middle students is divided in two terms as follows:

Students of IX to X will be evaluated on the basis Periodic Assessment and Term Examination. The Examination Pattern for secondary students is divided in three terms as follows:

An eight-point grading scale for scholastic is provided according to which the students will be assessed.

Grading Scale (Classes I to VIII)

1. Students of class XI will have to appear in 03 formal unit tests, half-yearly and final examination during the academic session.

2. In order to be declared as having passed the examination, a student shall have to obtain at least 33% in all five major subjects.

3. Students have to secure pass marks in the Unit Test, Half yearly and Final Examination separately. If in the aggregate percentage falls short of 33% due to absence in any of the tests/exams the student will have to appear for the same in order to be promoted to the higher class.

4. If a pupil fails for two years consecutively in the same class, he/she will not be allowed to continue for the third year and his/her name will be struck off from the school roll.

The Central Board of Secondary Education holds class XII Board Examination. All the policies of promotion are given in details in the CBSE Examination by laws. Three formal examinations will be conducted during the session.

The following subjects are taught in school.